[Let’s discuss FEAR .. FEAR OF WHITE MALES! It is the White male who is vilified. But it is THE WHITE MALE WHO CARRIES WITH HIM AN AURA OF FEAR THAT SCARED OUR ENEMIES SHITLESS IN PAST TIMES! However, I am pleased to announce, that in the 21st century… a few white males have been showing yet again, that we can put FEAR into the hearts of our enemies. In-fact, amazingly, single white men; single WHITE WOLVES; are proving that they can do it. They can go, and lay out some of our racial enemies cold! Imagine, white people, what we could do, if we have military forces … imagine Dylann Roof x1000=9,000 dead blacks or Robert Bowers x1000=11,000 dead Jews! Wouldn’t that be f*cking AWESOME? … They’d all be stinking up the USA … The Roman Emperor, Vitellius said: “a dead enemy always smells good”.

Now look closely at this article below about this black bitch who said that she wished Trump would be assassinated. Then she said that she said it “out of frustration”. So that’s her reason. Fine. Why doesn’t someone ask Dylann Roof, Robert Bowers, Alex Linder or myself, why we believe in killing and violence? Our reason would be the same as hers: FRUSTRATION. If someone had asked Hitler or Goebbels or the NAZIS that question, the answer would have been the same: FRUSTRATION. A race of Jewish garbage who want to be treated like Gods all the time, while behaving like low-level crooks and scum.

Let’s turn to FEAR … the FEAR OF WHITE MALES! This fear is good. I want you to see that this fear is VERY REAL, and this is absolutely EXCELLENT. This FEAR is needed x10 million! Yes, you heard me right. x10 million. We white males need to put fear into the minds of our enemies. Fear alone can buy us lots of time and power. We white males need to PROJECT FEAR IN A BIG WAY. We need to scare our enemies shitless.

In the quotes below, I highlighted important sentences in black. But I highlighted the fear-related sentences in red. Look closely at them. Here is a black lawmaker in the USA saying that whites are giving blacks sleepless nights. That blacks are scared of going out. BLACKS ARE AFRAID OF WHITES … in the USA! Just read those sentences. These people were scared shitless by Charlottesville!

FEAR! This is what white conquerors have used for tens of thousands of years to keep enemies in line! FEAR! We cannot love these Jews and Blacks – it would not work. Being friendly, and loving to these scum would NOT HELP US! But if we scared the living hell out of them so that they behaved themselves, THAT WOULD HELP A LOT. That could help us to WIN.

Therefore: Charlottesville, Dylann Roof, and our latest super-hero: Robert Bowers – should be applauded and supported. YES WE CAN SCARE OUR ENEMIES! In fact, our goal should be to give them mental illnesses from FEAR OF THE WHITE MALE! 14/88. Jan]

A Missouri lawmaker is under mounting pressure to resign after she said on social media she hopes President Trump is assassinated, following his response to violence at a white supremacist rally in Charlottesville.

Democratic state Sen. Maria Chappelle-Nadal went on her personal Facebook page Thursday morning to vent two days after the president blamed “both sides” for the brutality.

“I put up a statement saying, ‘I really hate Trump. He’s causing trauma and nightmares.’ That was my original post,” she told the Kansas City Star. The Facebook post received many responses, Chappelle-Nadal said, and to one she replied, “I hope Trump is assassinated!”

Chappelle-Nadal later explained that she didn’t actually wish harm to come to Trump but wrote it out of frustration.

“I didn’t mean what I put up. Absolutely not,” Chappelle-Nadal told the St. Louis Post-Dispatch. “It was in response to the concerns that I am hearing from residents of St. Louis.”

Though the senator quickly deleted the comment, an image of the statement swept social media, catching the attention of the Secret Service and prompting calls for her to step down.

The Secret Service said it is “looking into the comments,” adding that all threats made against the president, vice president and other protected people are investigated, whether the threats are direct, implied or made in passing, according to the Associated Press.

Much like when comedian Kathy Griffin released a video and photo of her holding a mask made in the image of Trump’s bloody severed head, a backlash soon came.

On Friday Republican Gov. Eric Greitens weighed in on Twitter, saying that if Chappelle-Nadal will not resign, the state senate can vote to remove her.

“I believe we should,” he said.

His comments follow condemnation and similar appeals for Chappelle-Nadal’s resignation from Democrats, including U.S. Sen. Claire McCaskill (D-Mo.) and U.S. Rep. William Lacy Clay (D-Mo.), who said that Chappelle-Nadal is “an embarrassment to our state,” according to the Post-Dispatch.

Senate Minority Leader Gina Walsh said in a statement that, “There is too much rancor and hate in today’s political discourse, and Sen. Chappelle-Nadal should be ashamed of herself for adding her voice to this toxic environment.” 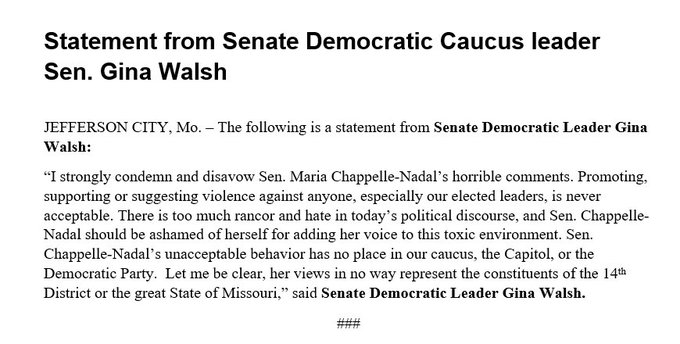 At a news conference Friday, Missouri Lt. Gov. Mike Parson, a Republican, said that if Chappelle-Nadal did not resign, he would “in my position as president of the Missouri Senate, immediately seek the expulsion pursuant to Article III Section 18 of the Missouri Constitution,” according to the Post-Dispatch.

Chappelle-Nadal has been outspoken about issues in the past.

The lawmaker, who joined the state Senate in 2010 and represents District 14, which includes Ferguson, has been critical of the fatal police shooting of Michael Brown in 2014.

Chappelle-Nadal once likened those looking to hand control of the St. Louis police force from the state to local authorities to “house slaves,” according to the Post Dispatch.

In 2014, she criticized the response of then-Gov. Jay Nixon (D) to unrest in Ferguson, at one point tweeting the governor, “I want a public apology for the Missouri Hwy Patrol excessively tear gassing a Senator & her constituents for 3 hrs 1st night!”

Following Thursday’s social media outburst, Chappelle-Nadal told the Associated Press that though she should not have posted the comment, she was exercising her right to free speech.

Trump’s remarks on Charlottesville, in less than three minutes

President Trump on Aug. 15 said that “there’s blame on both sides” for the violence that erupted in Charlottesville on Aug. 12.(Bastien Inzaurralde/The Washington Post)

Trump’s comments about Charlottesville “make it easier for racists to be racists,” she told the Kansas City Star. “As long as I have a voice, I’m going to talk about the damage [it] is creating in this nation.”

Chappelle-Nadal did not immediate respond to requests for comment.

She was, however, active on Twitter late Thursday, retweeting those who supported her and refusing calls to resign.

I am not resigning. When POC are respected by this WH & they are willing to do real work, I’ll sit down with them. People are traumatized!

And on Friday, she told the Post-Dispatch that she has met with and explained to the Secret Service that “the anger I experienced was related to the trauma of my constituents are going through” and she “did not wish to harm anyone.”

“I could have chosen and should have chosen better language. I do not think it is worthy of expelling me from the Senate,” Chappelle-Nadal said. “I am owning up to it. He makes me mad from time to time. He says outrageous things. My emotions got the best of me.”

She reiterated that she has no intention of resigning.

This story has been updated.

Books Mussolini as revealed in his political speeches, (November 1914 – August 1923)

Jewish Decapitation of White Leaders: Death of Austria’s Haider in 2008?

Video & Audio: BANNED: How Jews trick and cheat the RICH!

Shocking numbers of Free Masons… The Poison Mushroom, the Jew…

The Military is the Aristocracy of a Nation: Excellent quote on Military vs Politicians

Blood & Soil: The Korean War: A Good lesson America learned … or has it?

WARNING TO ALL WHITES/EUROPEANS: FUTURE LIES the Jews & Blacks will tell young Whites…

Pics: The JEWS did 911: Fifteen Years Later, Physics Journal Concludes All Three WTC Towers Collapsed On 9/11 Due To Controlled Demolition

Any really good books on Aryan history … the most Ancient Aryans?

Jewish hag gloats over Israel’s defeats of Turkey & Iran – Are we in a mild World War? – Greece allied with Israel?

Pic: US Customs seized a human brain on its way from Toronto to Wisconsin

White Self Discovery: Hitler … I have seen the NEW MAN… and he is TERRIBLE…

Pics: WW2: The Germans PAID those worthless Jews to work in the Factories next to the Concentration Camps!

The Malware on AfricanCrisis & White-Shop – I’ve been writing software…

Wuhan coronavirus threatens to DESTROY commerce throughout China – My Comments

HELP: Hard to find book about the (((Russian))) Revolution – Might be something Jews want to hide

THE AMERICAN EMPIRE: Boeing to unveil their stunning armed reconnaissance helicopter in March

The Jewish Pedophile Epstein: Possible evidence of secret film footage… Is this how Jews control Trump?